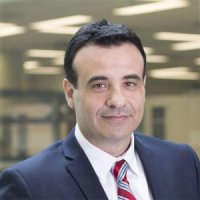 Professor Erdem Topsakal is the director of Commonwealth Cyber Security Central node initiative. He is currently a tenured full Professor and Department Chair of Electrical and Computer Engineering at Virginia Commonwealth University in Richmond, Virginia. His research areas include implantable antennas, numerical methods, cancer monitoring and detection, microwave hyperthermia, fast electromagnetic methods, antenna analysis and design, direct and inverse scattering. Prof. Topsakal is one of the pioneer in advancing innovation in science education and an integral member of the innovative discovery science platform (iDISPLA). He is the force behind machine-to-machine capture the flag hackathon competition for undergraduate STEM students, capstone projects and advanced R&D that creates an experiential learning environment for our undergraduates.

He has published well over 160 journal and conference papers in the areas of his interests. He received the URSI young scientist award in 1996 and NATO fellowship in 1997. He is the recipient of 2004-2005 Mississippi State University Department of Electrical and Computer Engineering outstanding educator award, 2009 Bagley College of Engineering Research Paper of the Year Award, and 2010/2011 Mississippi State University State Pride Award. He is a senior member of IEEE and an elected member of the URSI commissions B and K. He served as the Associate Editor for IEEE Antennas and Wireless Propagation Letters (AWPL) from 2006-2015, Associate Editor for URSI Radio Science Bulletin 2011-2014, and Chair for URSI-USNC Commission K, Electromagnetics in Biology and Medicine from 2012-2015. He is currently the Chair of the USNC URSI student paper competition. He is on the IEEE USA Committee on Communications & Information Policy as a representative of IEEE Engineering in Medicine and Biology Society. He is a member of National Institute of Health SBIB (10) Biomedical Imaging study section. He is also a member of electrical engineering honor society, eta kappa nu. He is the founder of Mississippi State University Ballroom Dance club which has been active since 2005.